Just a little something I have been poking away at intermittently.  I had forgotten all about it until a post on TMP reminded me of the thing.  Not sure it will ever see the light of day, but we'll see.  These might be of use to gamers playing Victorian sci-fi or pulp-adventure games. 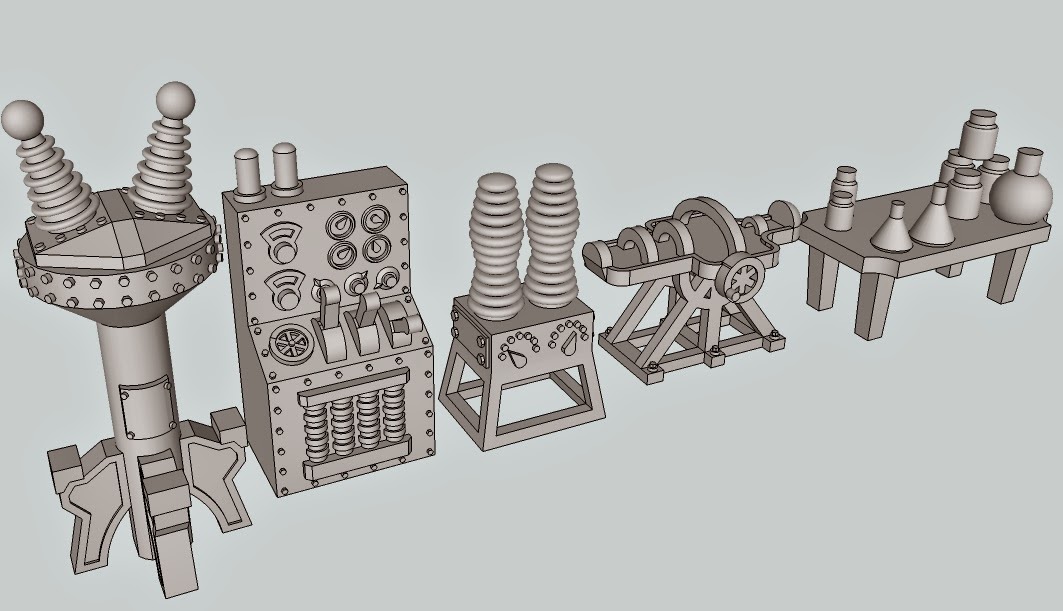 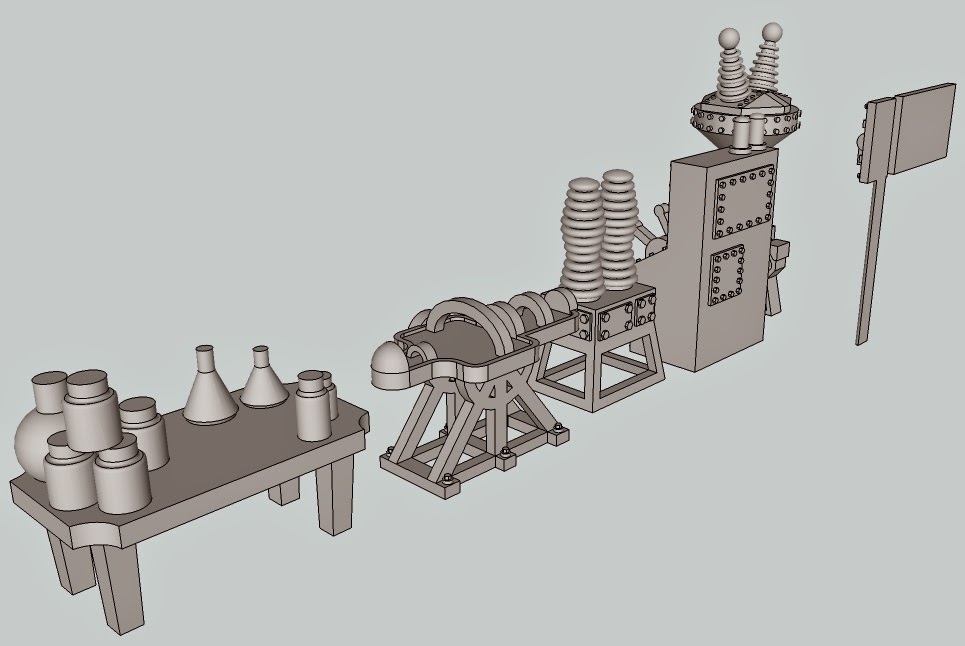 In-between cleaning up the mess that Shapeways made of my storefront and pushing forward on commissions I'm building, I took the time to make something that might be useful for both modern/near-future and sci-fi gamers.  The Polish Ministerstwo Obrony Narodowej (English:  "Ministry of Stay The Hell Off Our Lawn") has been one of the few European defense ministries actively continuing to develop new and improved weapons systems, which may have something to do with their neighbors to the east, who tend to be... indiscreet.  It's like having those neighbors who are the neighborhood drunkards, but instead of a couple junked-out cars sitting in the front yard, the Russians have thousands of modern tanks.

One of the most recent announcements from the MON is the PL-01 medium tank, which is a testbed for some new warfighting systems, including an active stealth system designed to defeat electronic detection and targeting systems.  The PL-01 is a very cool looking tank, so I was excited to make it available to the 3mm gaming community.

The PL-01 is available on my webstore here:

A couple pics of the real thing: 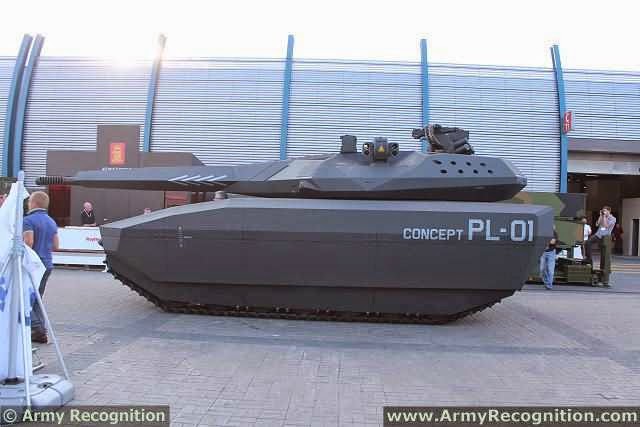 And a couple of my version:

The Storm Cloud over Shapeways

For those not intimately involved in the affairs of Shapeways, the on-demand 3D printing service where my storefront is hosted, there has been a pretty contentious controversy over the pricing changes to their Strong & Flexible plastics and Stainless Steel.  The details are already laid out well enough that I'm not going to repeat them here, but I'll share the thread where we shop-owners have voiced our discontent with the new pricing model and the extremely short notice that Shapeways gave us of the impending change (specifically, they only gave us 7 days' notice that WSF and Steel prices would be radically different):
https://www.shapeways.com/forum/index.php?t=msg&th=21153&start=0&

"We are ENCOURAGING design freedom and making the pricing scheme more FAIR. ... I look forward to this new permissive era of design and the glorious, unbound creativity these new permissive, fair prices will unleash."
(Yes, someone who works for Shapeways actually said that)


Because of the new pricing formula, multi-part models are severely punished, with some of my items jumping in price as much as 500% or more.  Now, I've already voiced enough of my dissent in the above thread, so I'm not going to regurgitate it here (other than my snarky 1984 homage above, because I just couldn't resist a wee bit of snark).  Rather, I just want to make my loyal fans aware (yes, all three of you), that if you were planning on purchasing something in WSF and have seen the price jump by an astronomical amount, please be patient.  I'm going through all 266 of my models to put multi-part products on sprues so that there is only one per-piece charge for the entire product.
If you have a specific item that you wanted to purchase but now can't or (understandably) won't, please drop me a line and I can push that product up higher in my queue of things which I'm spruing together.  I'm already working on one order for a guy who wanted to order one each of my MicroFleet sample packs, and, as you can imagine, he was somewhat taken aback by the price increases (sorry, Andrew!).
So, thank you, in advance, for your patience.  Again, I'm working on this as fast as I can (aside from taking time out to find decent 1984 screencaps), and if you are waiting on the spruing to be completed before ordering a specific item, send me a message with that item number or the link to it on my Shapeways store and I'll make it a priority.

Thanks,
Andreas
Posted by javelin98 at 11:43 AM No comments:

So, bowing to peer pressure, I made up some Next Generation-flavored ships for my Coalition faction.  I'm not sure if I'm quite set on all of these, but here's where I'm at with them at the moment.

First, we have (from left to right), the Nova-class destroyer, Defiant-class frigate, and Valkyrie-class fighters: 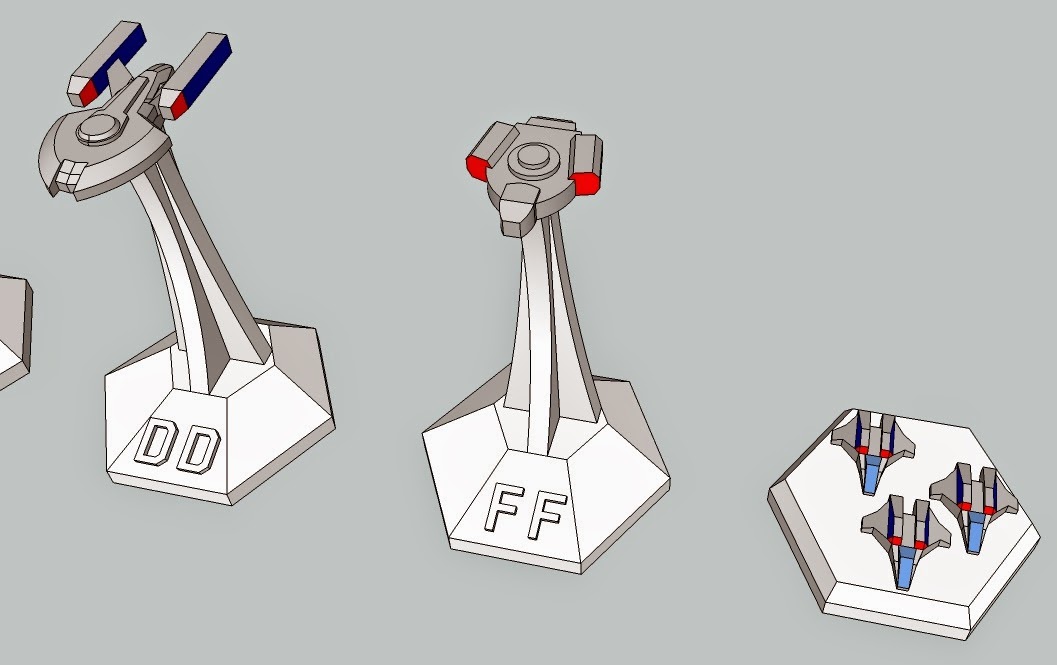 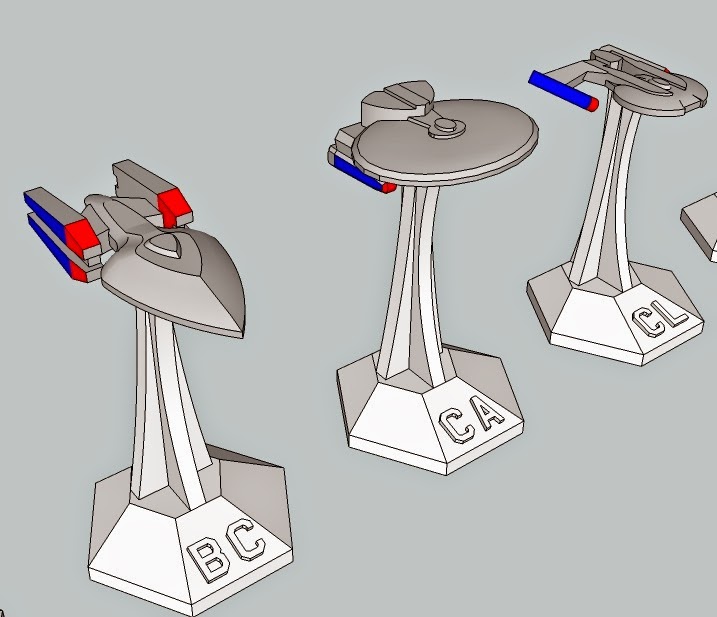 Rounding out the fleet are the Pregnant Hippo-class carrier, Sovereign-class dreadnought, and Galaxy-class battleship: 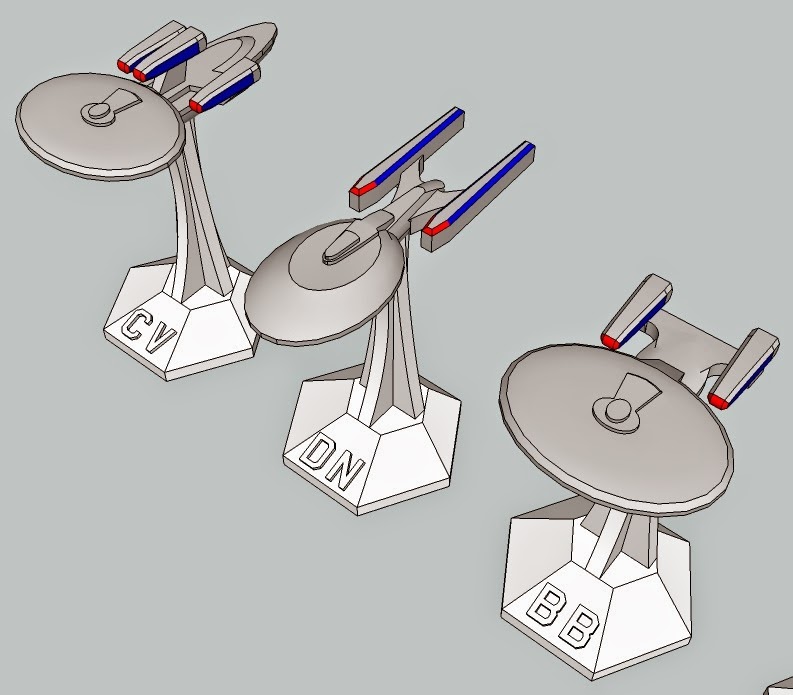 And finally, a family photo:

The only original design in the lot is the carrier.  The Pregnant Hippo is obviously just a kitbash of the Galaxy-class with an extra nacelle and a badly-distended engineering hull that serves as a through-deck fighter bay. 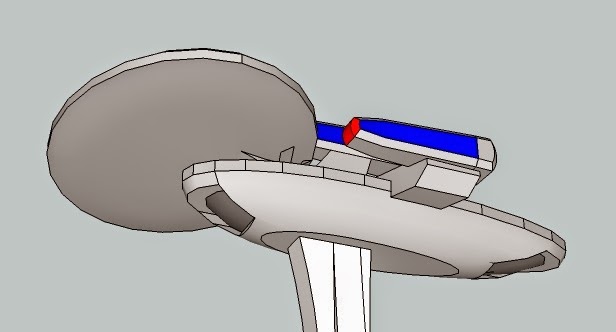 These ships were harder to build than the previous Coalition fleets because of the sheer number of curvy parts and weird slopes involved with TNG-era ships.  Still, I think they turned out okay, and when printed, should look decent on the tabletop.

Another challenge was that TNG canon doesn't necessarily follow TOS and SFB norms, so identifying what is a "cruiser" versus a "battlecruiser" or "battleship", so I just had to make some arbitrary selections and scale them relative to each other.

Finally, the minimum wall and wire thicknesses on Shapeways played merry hob with designing the warp nacelles.  The Nova and Prometheus should have much nicer, slimmer nacelles, but there's no guarantee that the 3D printers in New York would be able to accept them, so I had to make them thicker than they would be if they were a larger scale.
Posted by javelin98 at 10:49 PM No comments:

*cough*  Little Simpsons humor there.  Sorry.  I'm getting counseling for that.

Anyway, I finally came up with my not-Kzin faction, which I'm tentatively calling the "Kzouti".  You know, Kzin, Kzout... I thought it was terribly clever, but I'm rather simple that way.

I love the ship designs in Star Fleet Command (SFC), the excellent line of PC games from the sadly-defunct studio Taldren and the still-going-strong studio Interplay.  So, I've decided to keep the chunky design philsophy of the original ships and make it a little sexier (although, if you're imagining having sex with an alien starship, Dr. McCoy will be waiting for you in Sick Bay with a sedative and some instructional videos).  Looking around for inspiration, I found the following excellent site:

(By the way, the Federation ships on that site are what I wish JJ Abrams had used for his rebooted Star Trek).

I really liked the more streamlined and aggressive look of these ships, so I decided mine would follow a similar design philosophy;  I rather like how they turned out.  This entire fleet took me less than four hours to design, as opposed to the days it took me to make each of the original Coalition starships.  I think I'm getting better at this Sketchup thing. 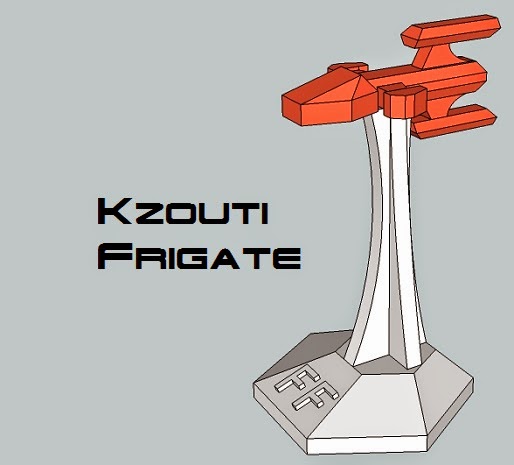 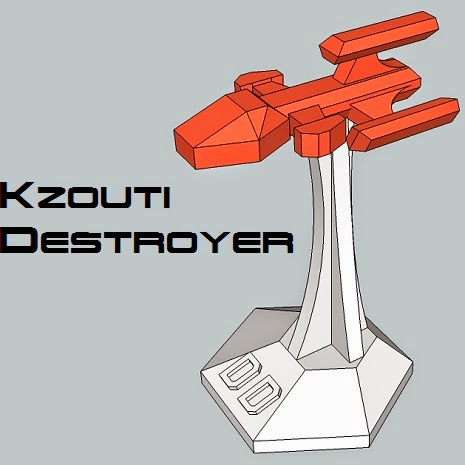 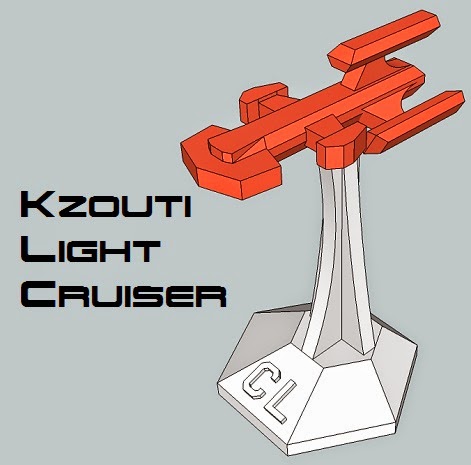 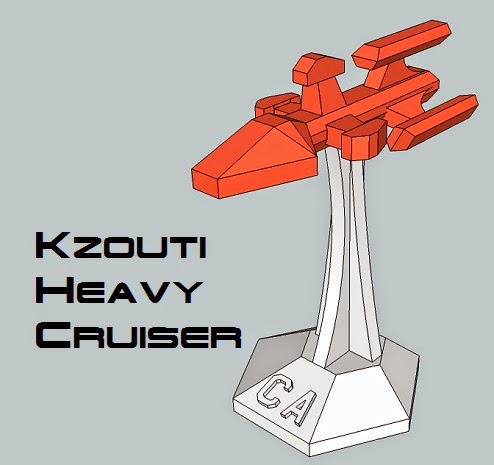 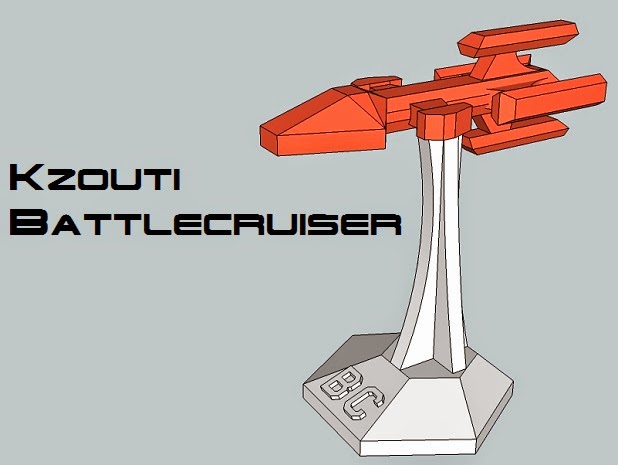 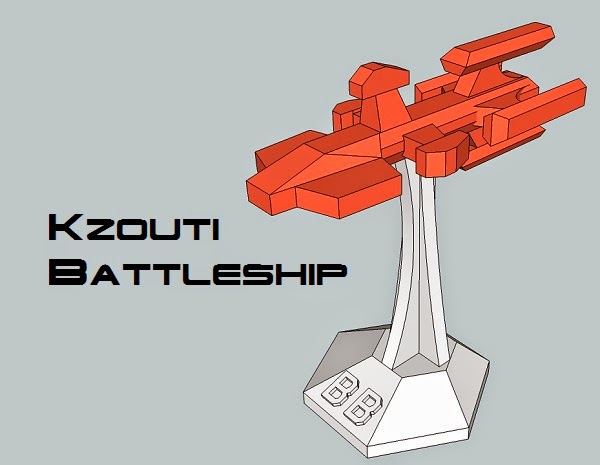 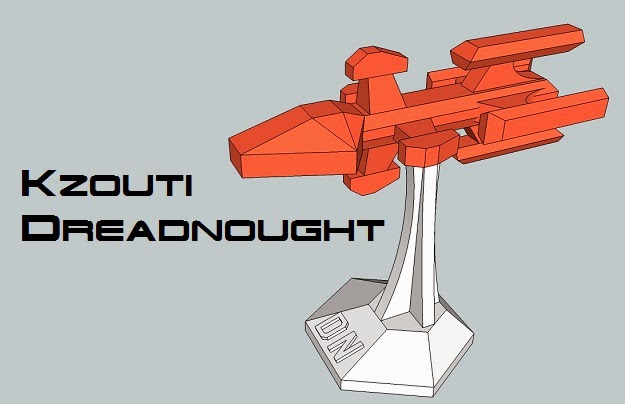 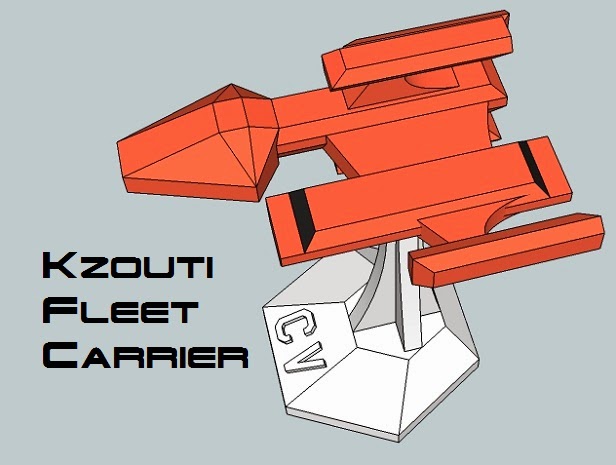 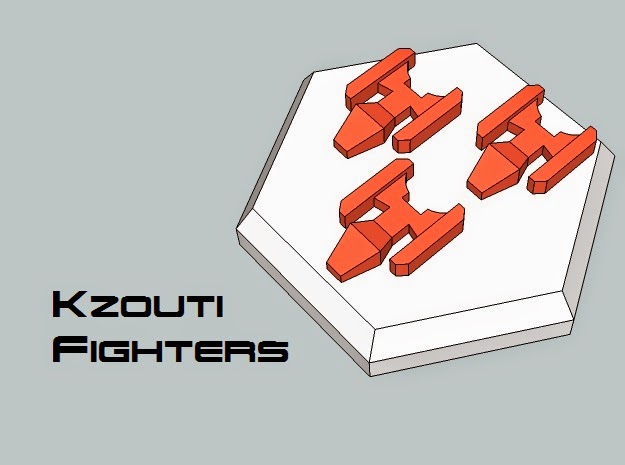 Using the Stormchicken as the base, I was able to crank out these two things in very little time.  First is the Stormturkey dropship: 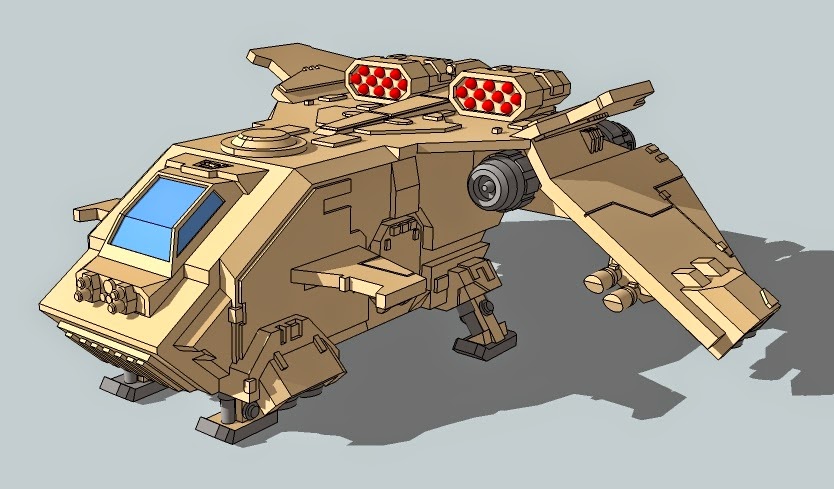 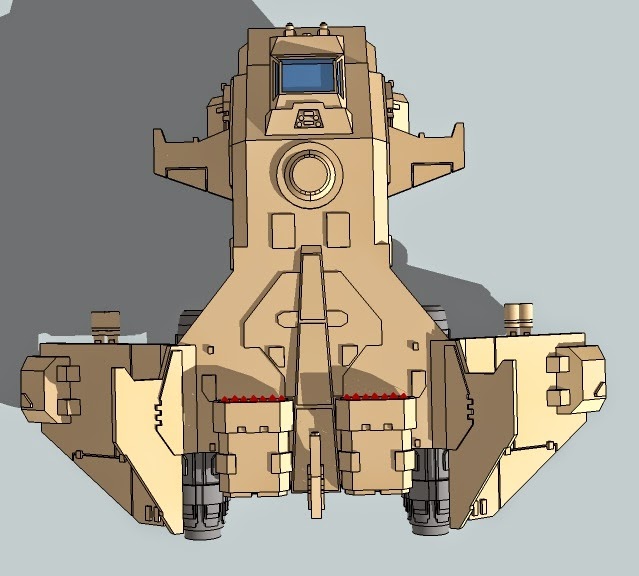 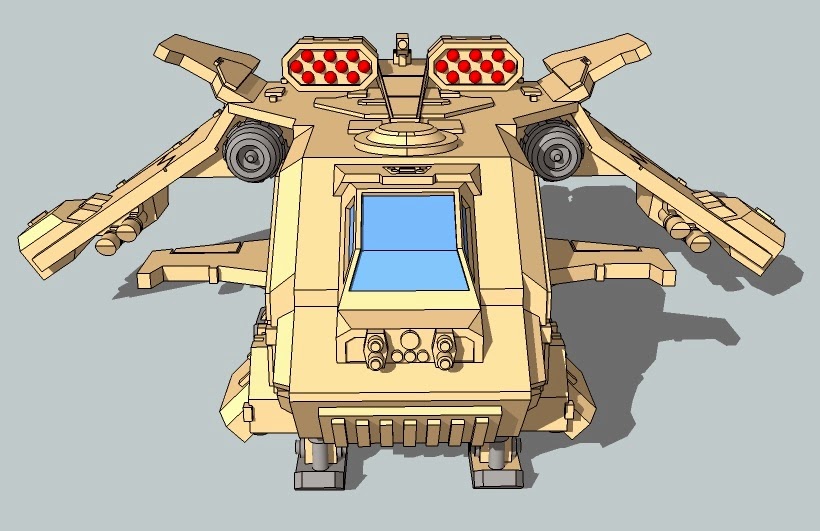 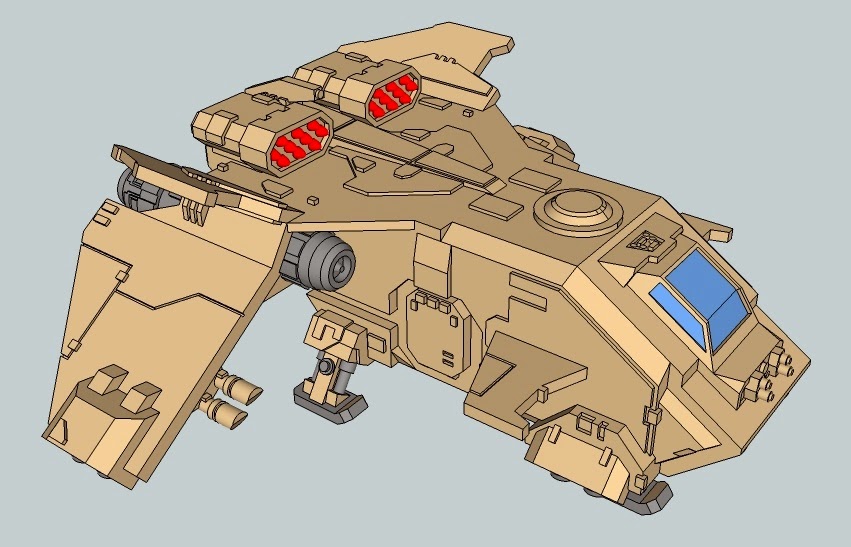 Next is the Fireturkey gunship: 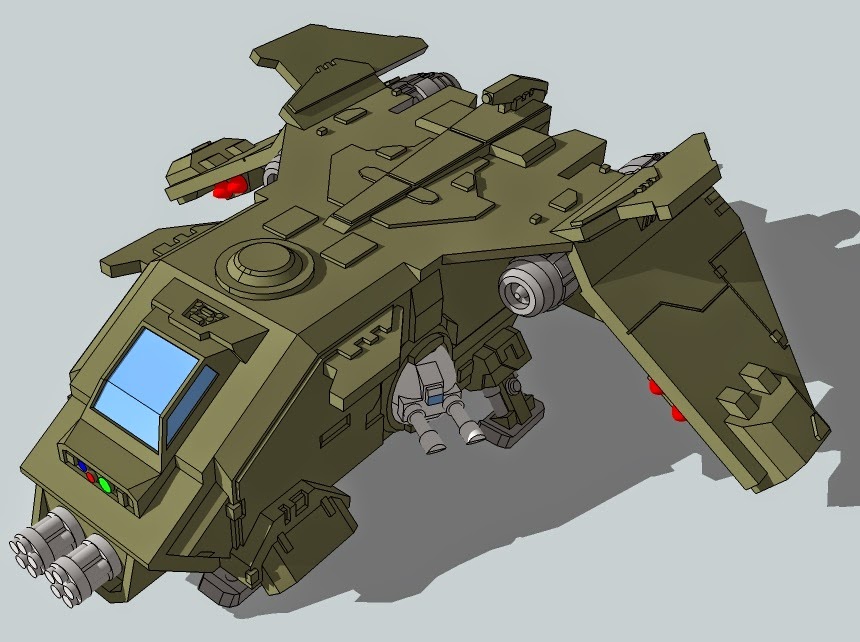 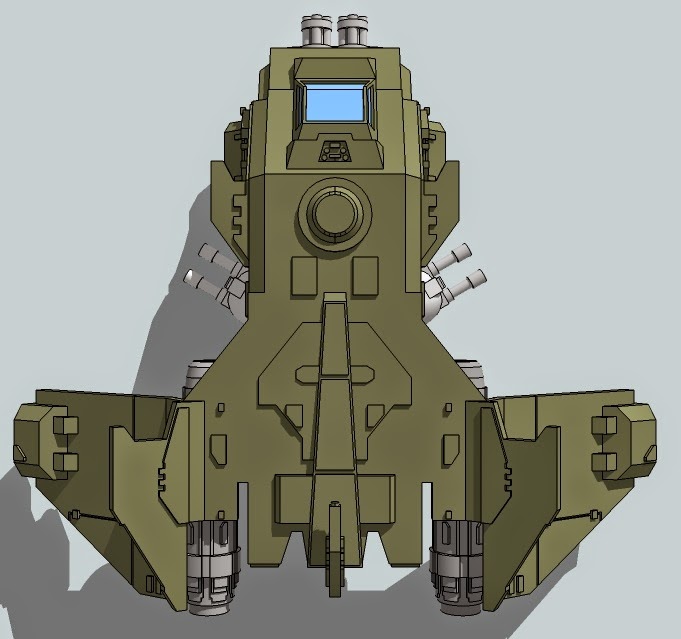 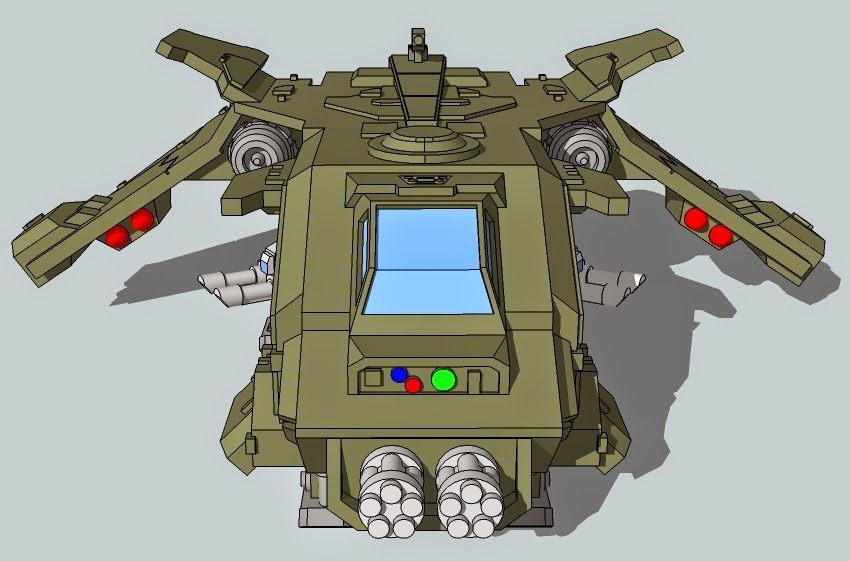 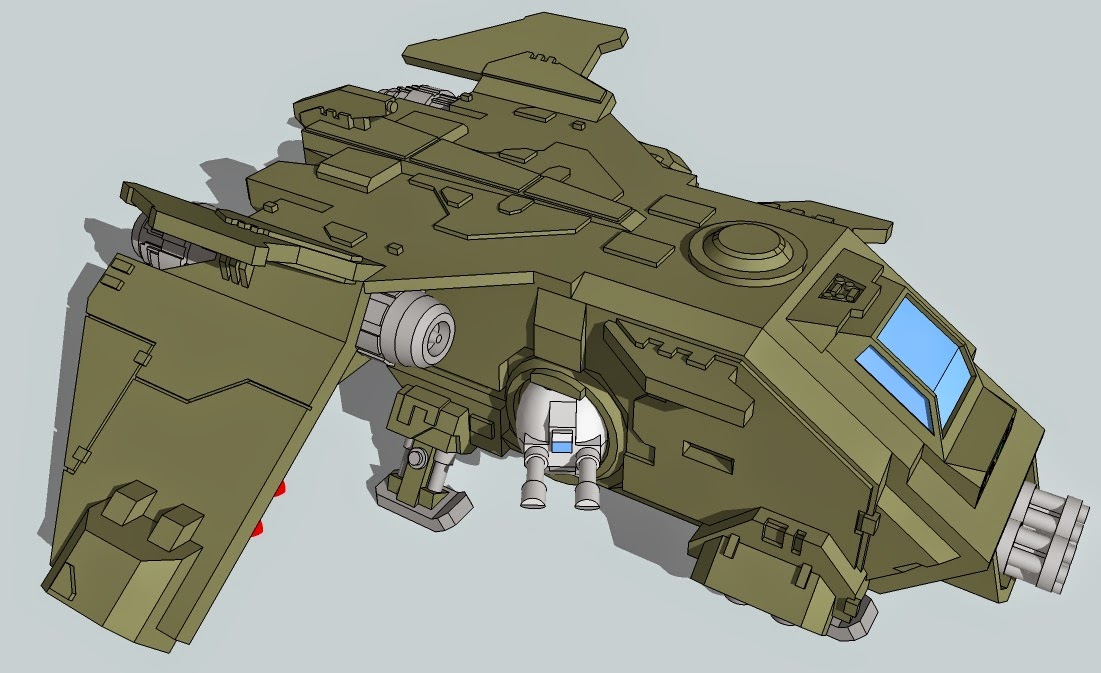