Some time last year, I was taken by a bug (this seems to happen often) to design some 6mm-scale buildings that could be easily stacked to reach any height desired by the user.  Attached are some photos of how that initial effort turned out.

The black infantry bases seen in the pics were designed digitally by me, but are the exact dimensions of both the old and new Epic 40K infantry bases (20mm square and 10x40mm).  I designed the buildings to allow them to accommodate both types. 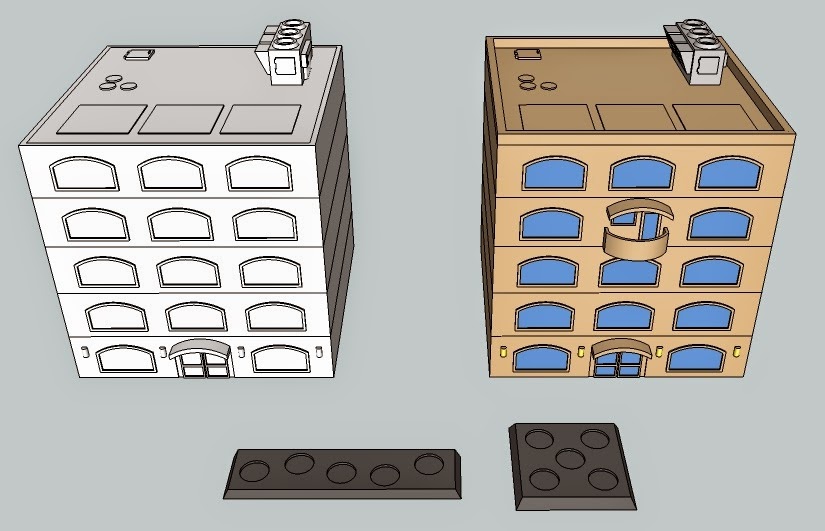 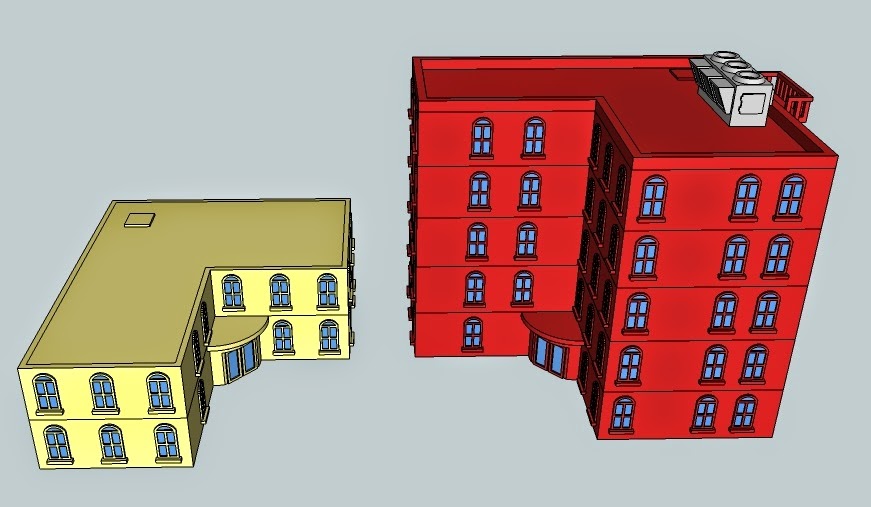 For a lark, I added a fire escape to this one: 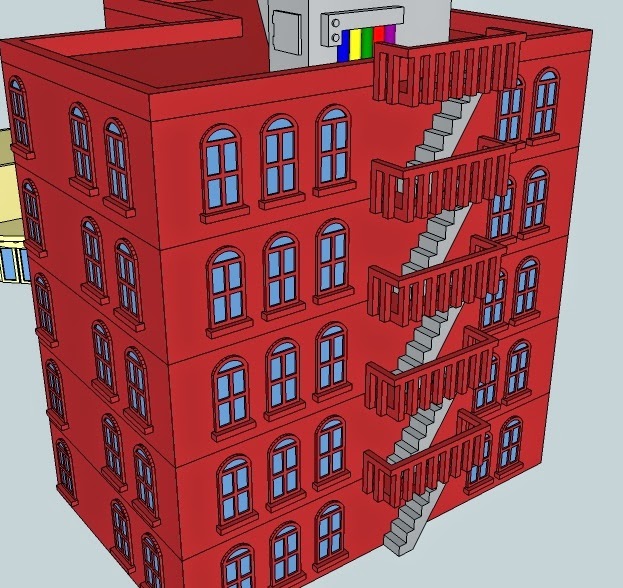 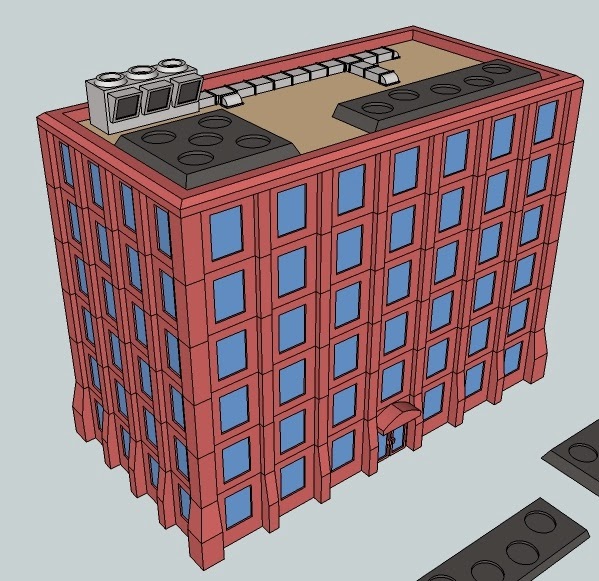 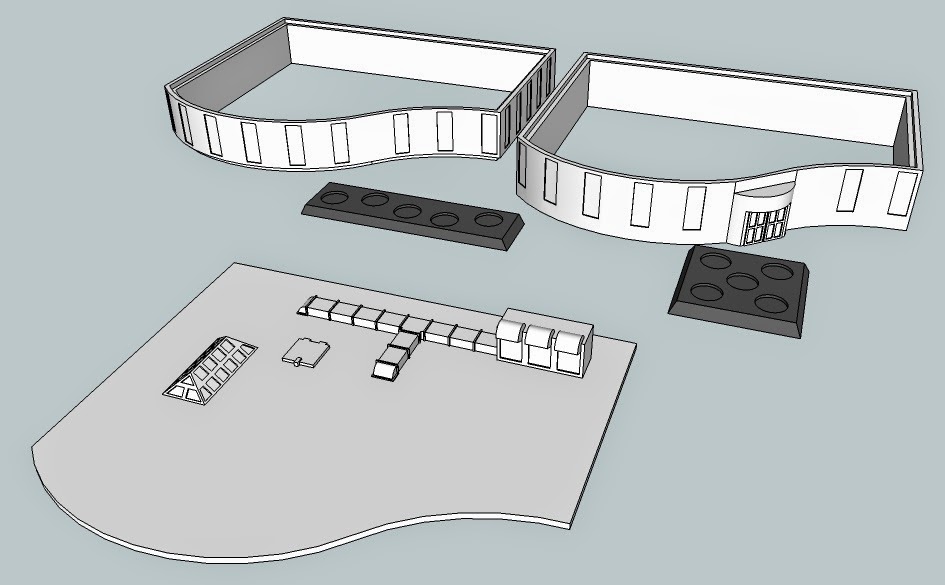 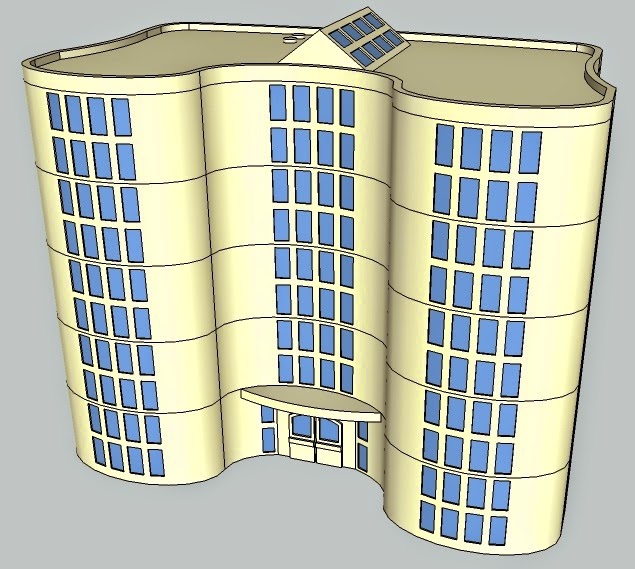 I also have made some modular staircase-strips for modelers to use in converting everyday objects to 6mm terrain pieces.  These will be available on my Shapeways store soon.  The silhouettes are 6mm from nose to toes. 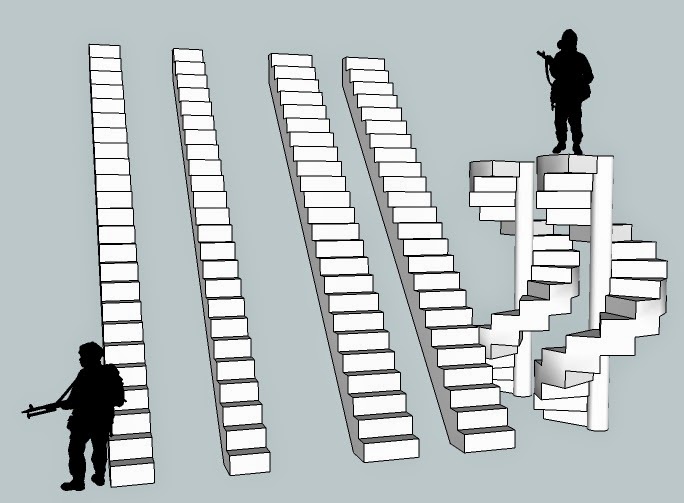 If Chuck Norris was a Wargamer...

Okay, I know Chuck Norris jokes are a little past their prime, but most gamers will appreciate this list (and since I wrote these, I don't need no stinkin' attribution):

Chuck Norris doesn't roll the dice. He kicks the world, and the trembling causes the dice to roll by themselves.

Figure manufacturers stopped using lead because it melted too easily when exposed to Chuck Norris's glare.

Percentile dice rolled in Chuck Norris's presence never roll "00". Chuck Norris is the only thing in the universe that is 100%.

Each and every skull on all the Warhammer 40K products in the world is dedicated to a specific victim of Chuck Norris.

Chuck Norris carries his own blast template, which he is allowed by law to use in any game he plays. It's the size of Fear and made of Pain.

Chuck Norris doesn't use rule books. He brings blank paper and the rules write themselves around him.

By the time you say the words "Roll for initiative", Chuck Norris will already have won the game and kicked your spleen out through your back, to boot.

If Chuck Norris were the Emperor in Warhammer 40K, he would simply roundhouse kick Chaos hard enough to fling them back through the Warp and cauterize it closed. Then he would eat the Tau and use the Tyranids as compost.

Chuck Norris has a character sheet with only one block on it. It says simply "Chuck Norris" and trumps all other attributes.

Chuck Norris doesn't paint minis. He simply glares at them and they hurriedly paint themselves.

When Chuck Norris plays ancients, he demands that the little pikemen have their pikes coated with curare. The loser has to eat them. However, Chuck Norris doesn't lose, ever.

Chuck Norris doesn't need dice, since he invented probability (as in, "there's a 100% probability of roundhouse kick-related pain in your future").

The words "war", "blood", "pain", "kick", and "fighting" are all copyrights of Chuck Norris, requiring all games using them to pay him royalties.

Source books are called "splatbooks" because of what Chuck Norris once did to some of their authors.

The Chuck Norris die has only one face. It's Chuck Norris's, and it always wins.
Posted by javelin98 at 10:53 AM No comments:

Was the dark of the moon on the sixth of June, in a Kenworth pulling logs...

This project actually began as an exercise in getting better at making curved surfaces in Sketchup, but it eventually became more focused on making actual vehicles.

My dad was a long-haul trucker for years, and I'm probably one of the few people who both knows all the words to the C. W. McCall song "Convoy" and who also knows what they all mean!  As part of my curved-surfaces exercise, I decided to Sketchup some 6mm-scale futuristic trucks (a.k.a. lorries for our British friends), busses, and other civilian vehicles.

Since civilian vehicles in a wargame are little more than mobile terrain pieces or an objective to fight over (Side A is trying to capture them whilst Side B attempts to prevent same), I decided to name this line of vehicles my "Maguffin Motors" line.*  Most of the inspiration for these came from concept truck sketches found around the Web.

Without further ado, then, here is Maguffin Motors' new lineup for 2077!

The Ferrigno is a multi-purpose heavy hauler, equally comfortable on cross-country and intra-city routes.  Here it is pulling a standard trailer: 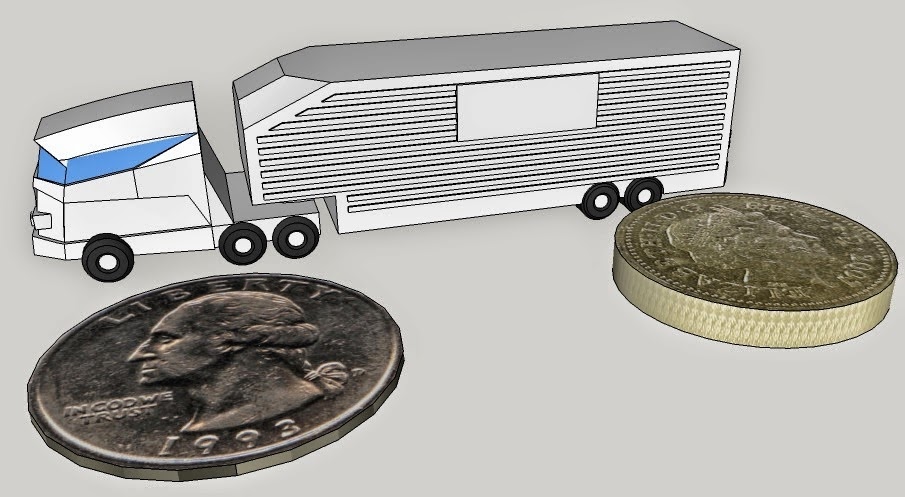 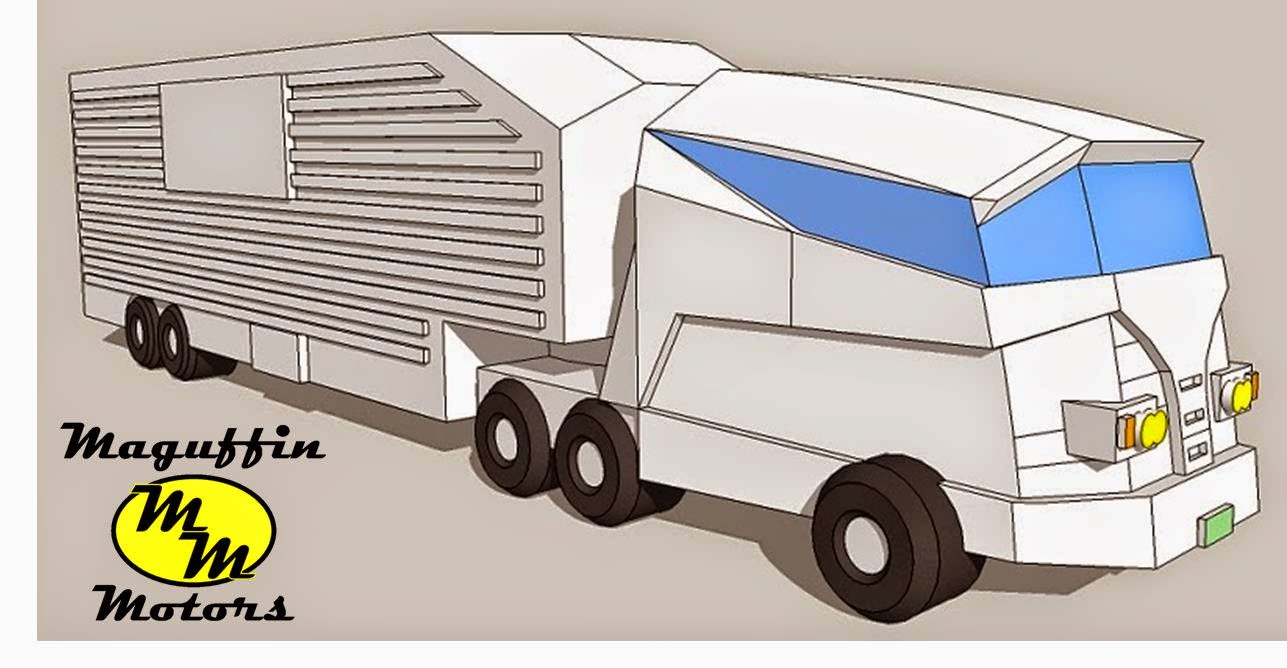 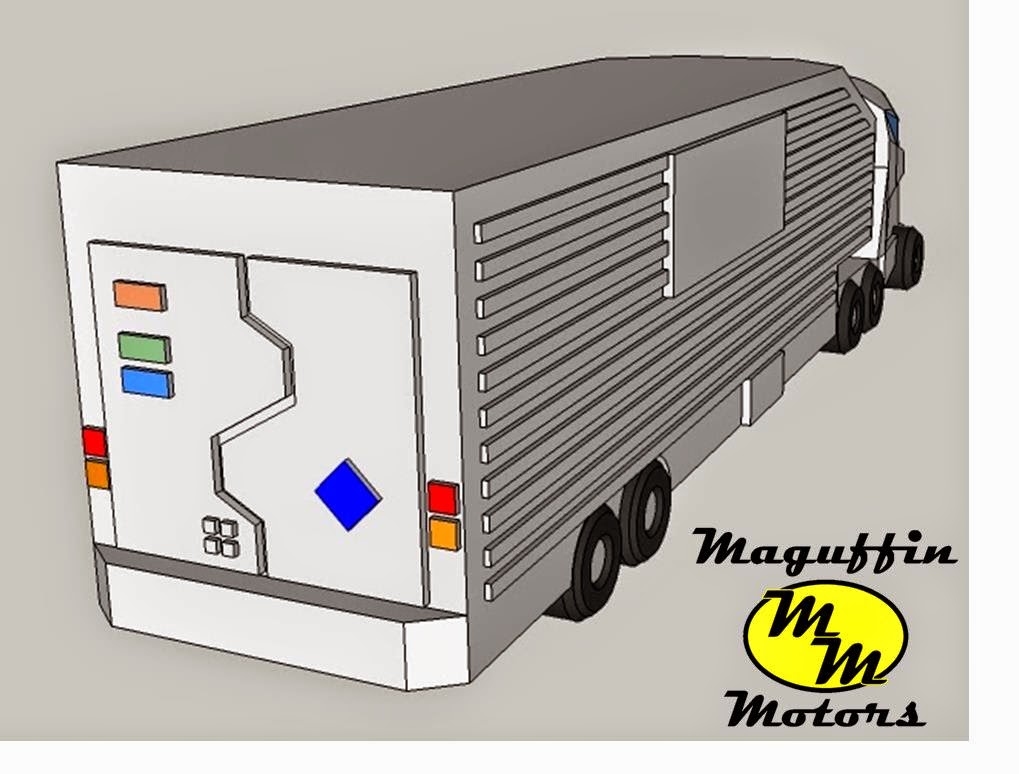 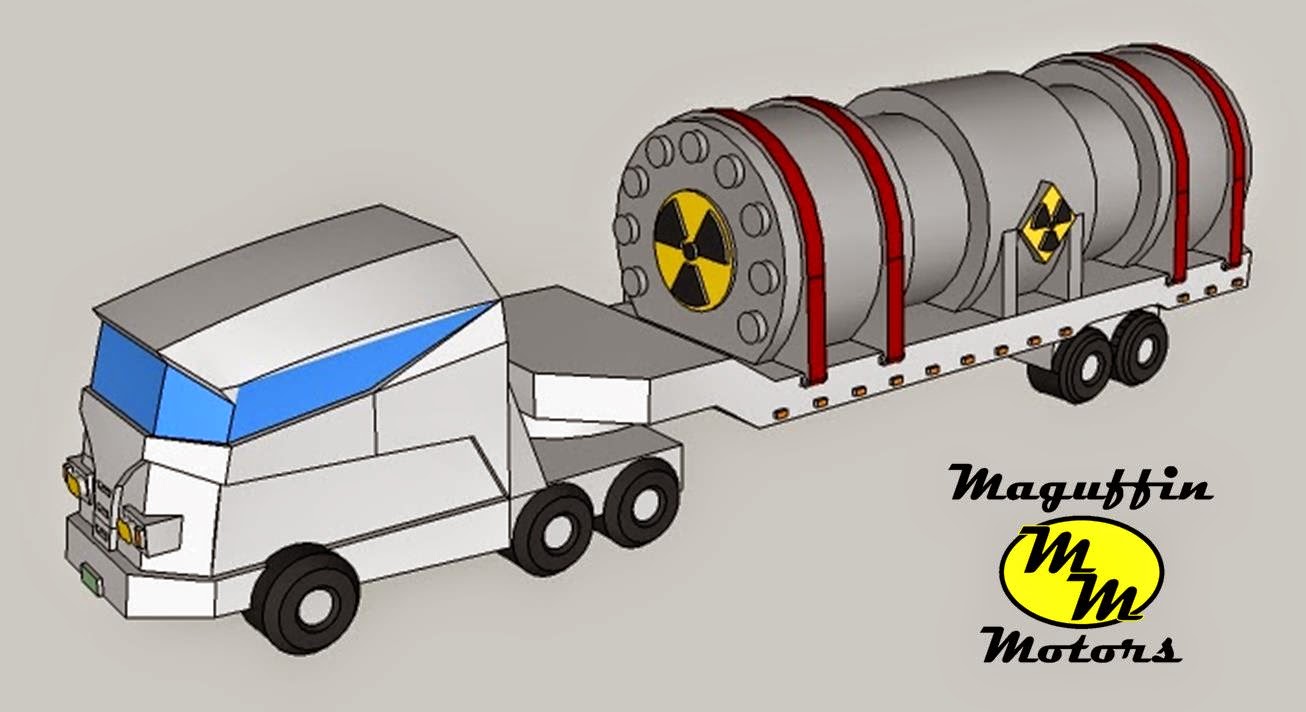 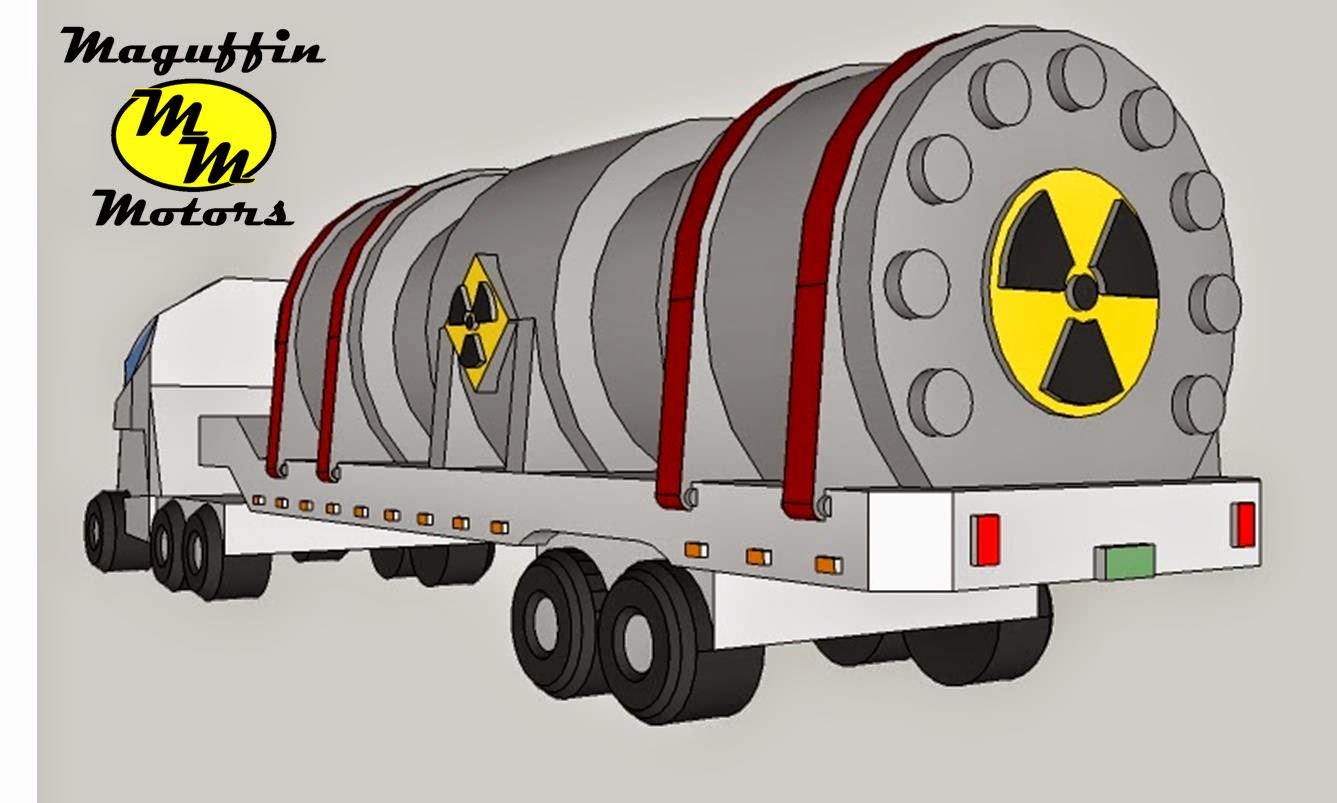 Next is the Angus, another heavy-hauler that is designed to provide maximum field of view for the driver, hence the wraparound glass.  The Angus is well-suited for difficult deliveries that require careful handling of the truck.  The Angus is seen here pulling a Maguffin Motors liquid/gas container trailer, which Maguffin has successfully marketed to the likes of Texxon, GazproMobil, Citgonoco-Phillips, and the Sunshine Dairy Company, supplier of fine milk products to public school systems everywhere. 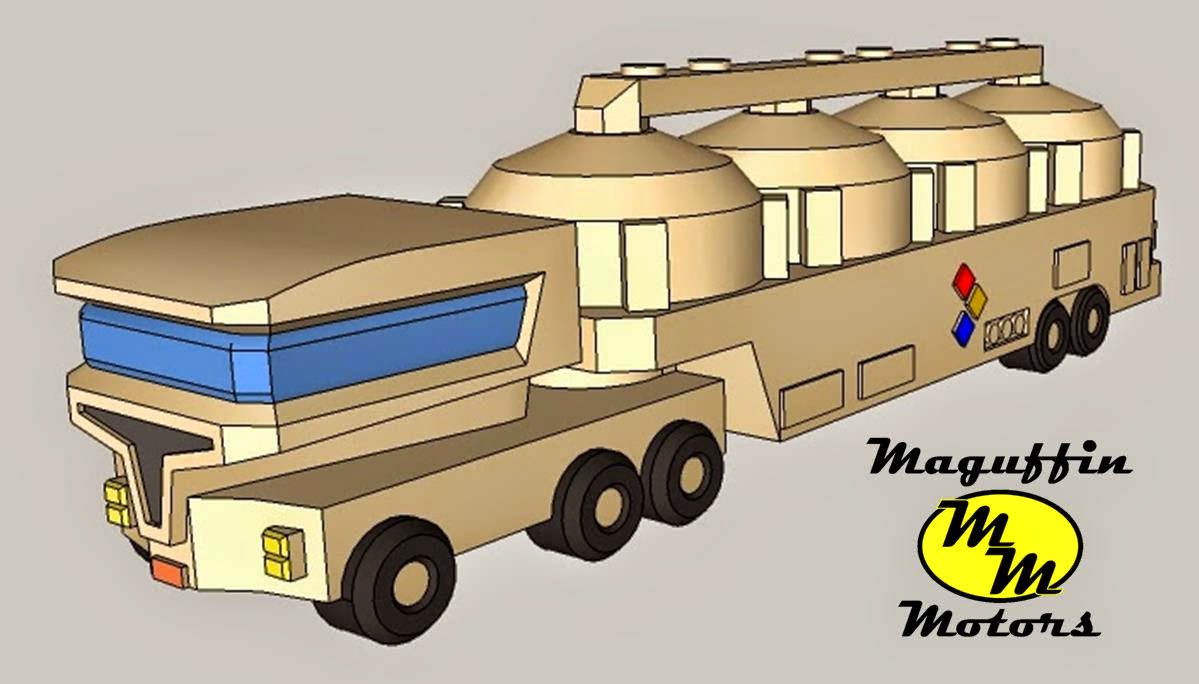 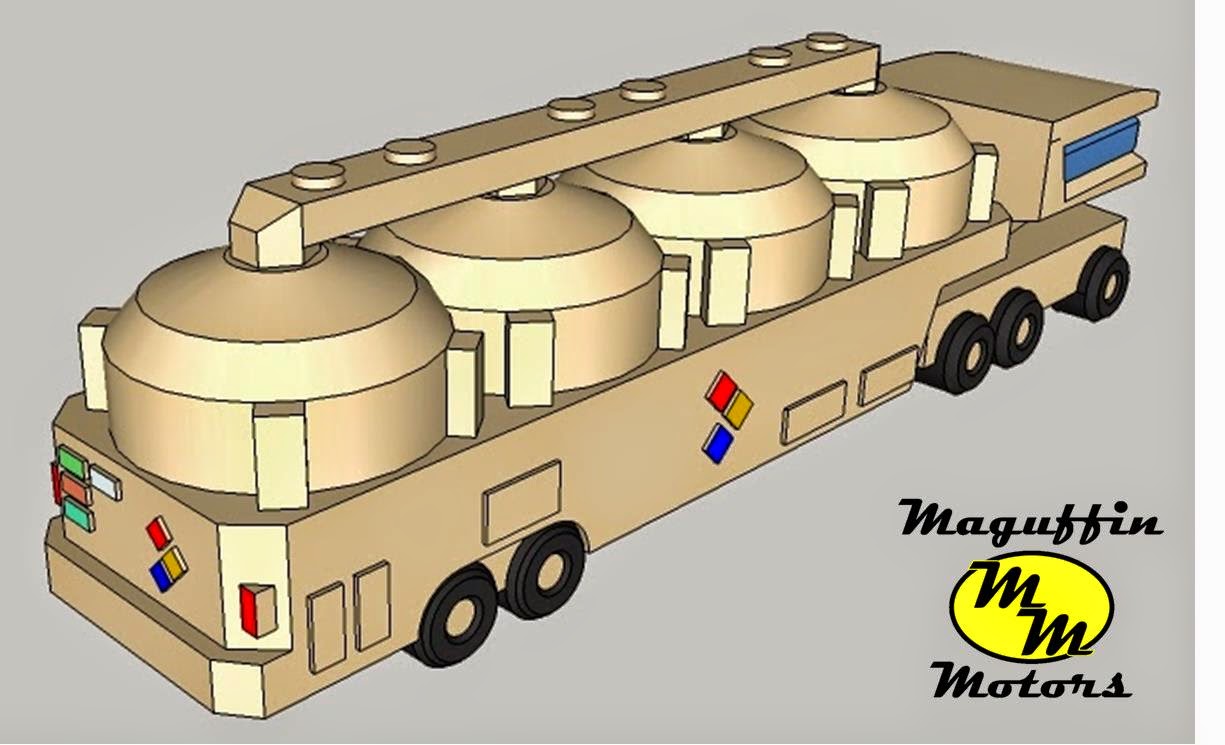 Here is Maguffin's premier long-haul tractor-trailer combo, the Zephyr.  The Zephyr is intended for use on the open highway, the Autobahn, and other settings where speed is the primary need of the customer.  The Zephyr can carry up to 150 tons at speeds of up to 200 kph. 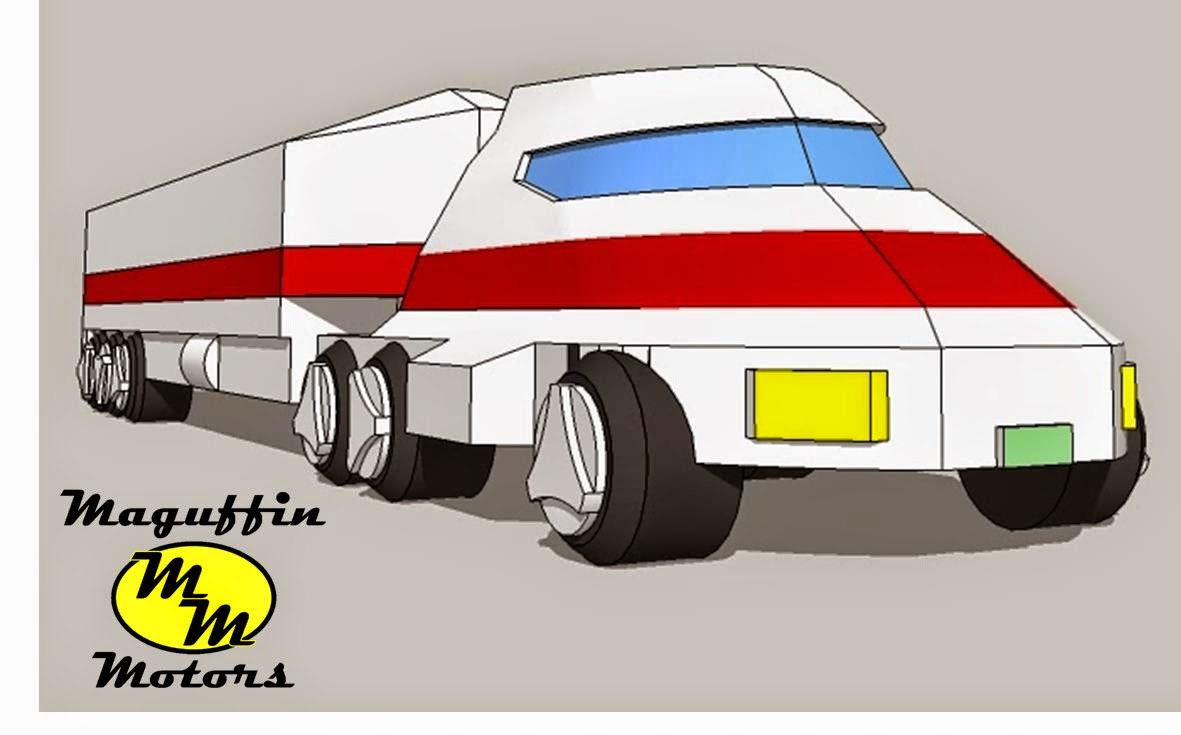 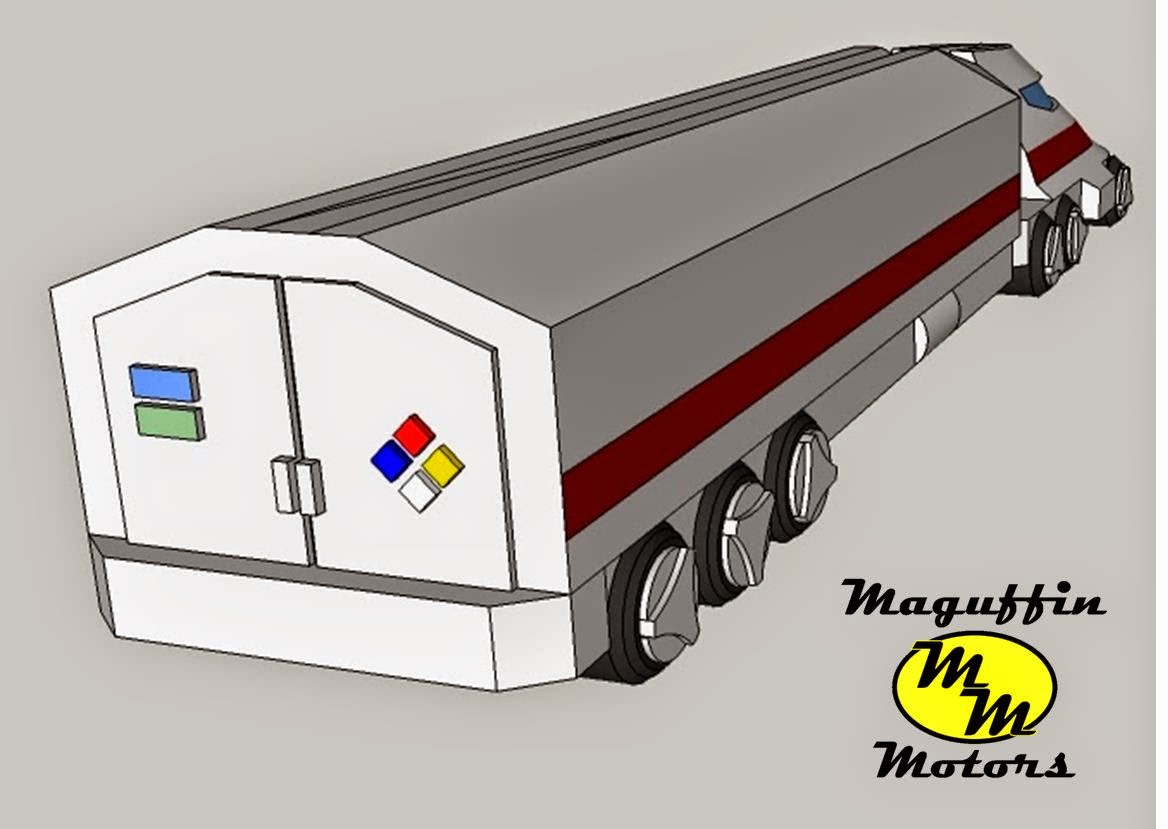 An exciting new addition for 2077 is the Zephyr-based Hurricane, an air-cushion vehicle propelled by two Pratt & Royce jet engines.  The Hurricane utilizes the same patent-pending air-cushion system that Maguffin has successfully sold to the military, enabling the Hurricane to glide over the highway on a frictionless cushion of air! 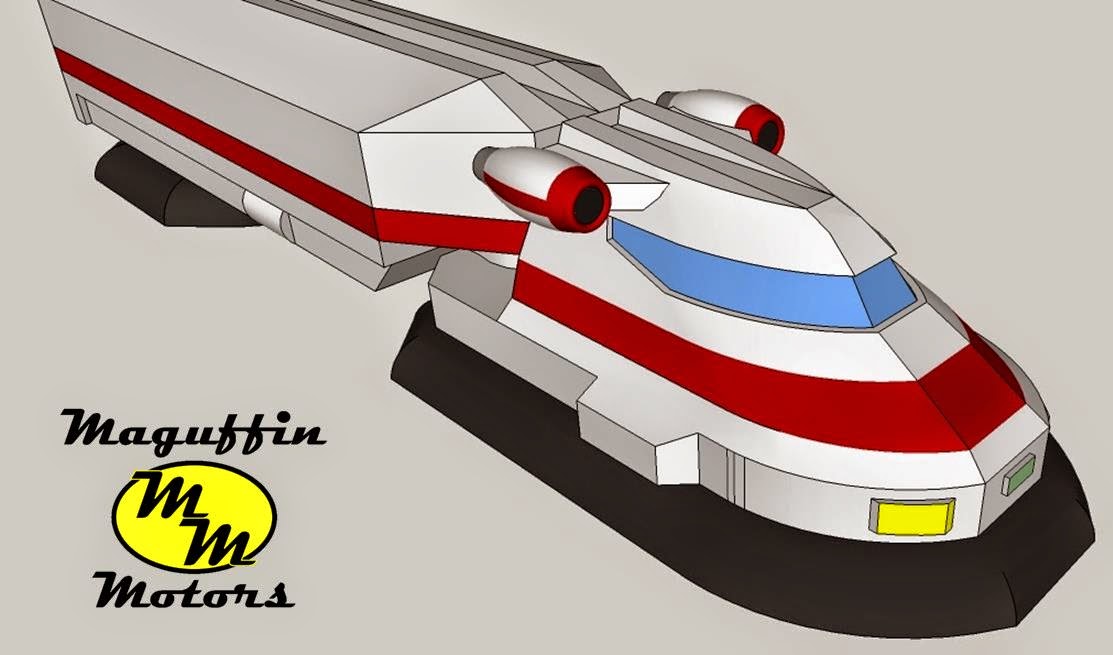 For short-haul and intra-city work, Maguffin is proud to introduce the Llama.  The Llama is ideally suited for moving small containerized loads between ports of entry and distribution centers. 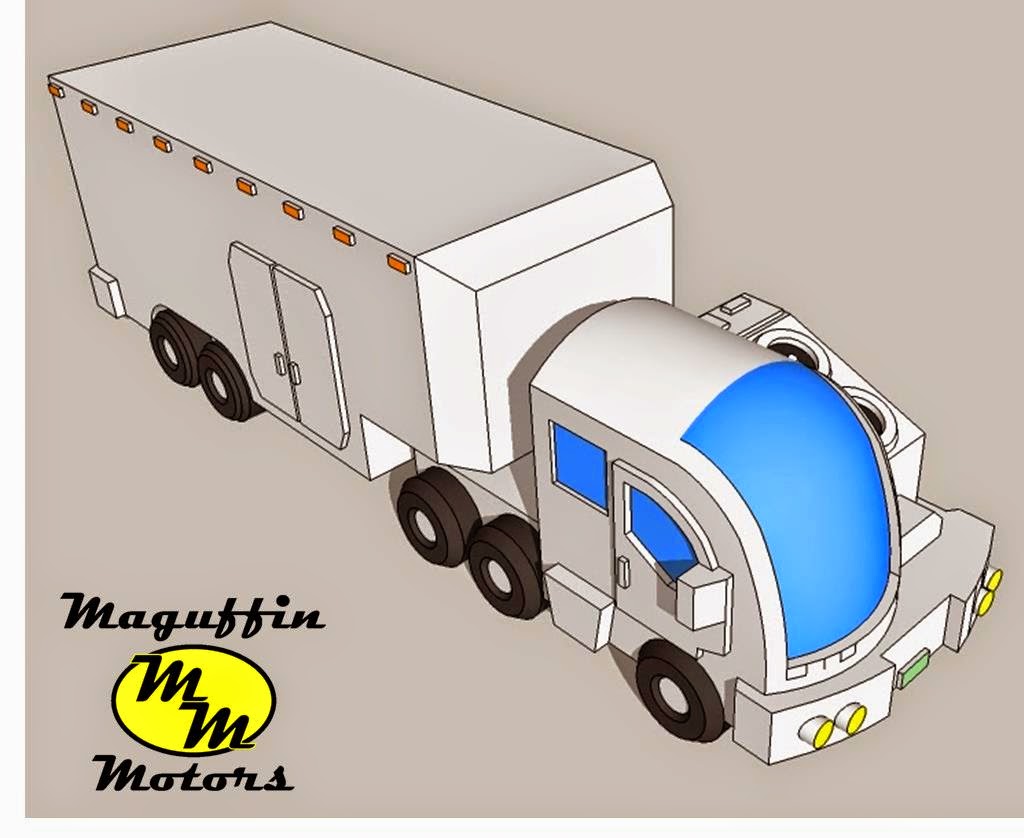 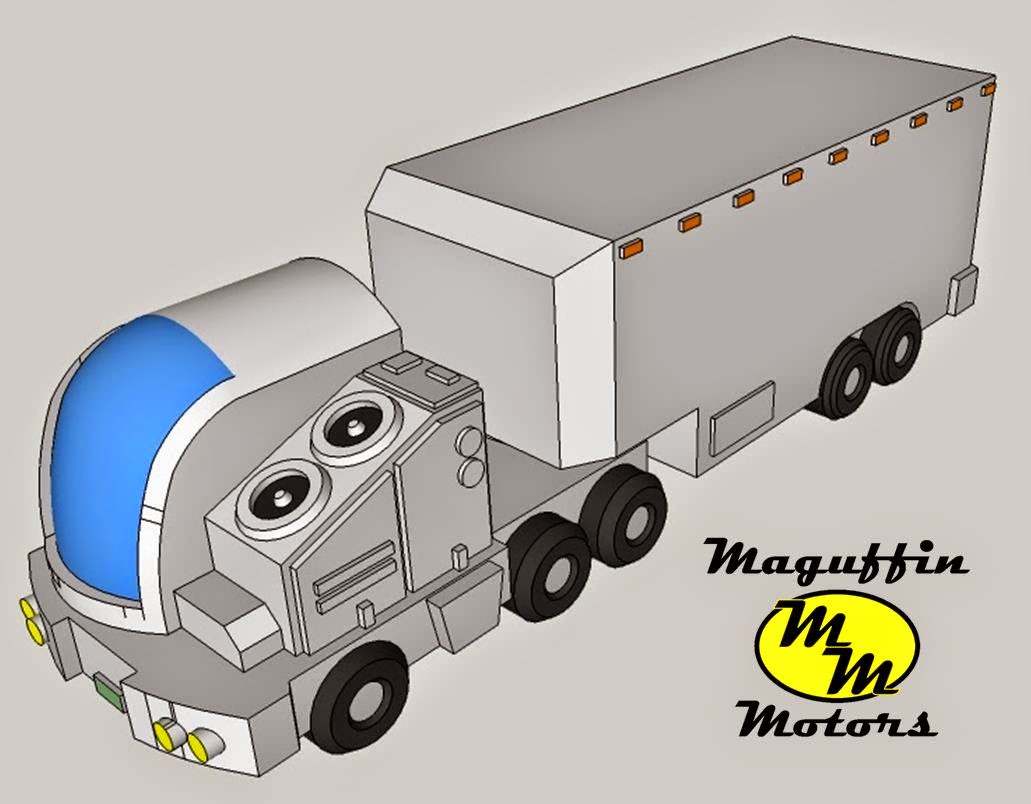 As part of its diversification efforts, Maguffin has taken the same high standards and cutting-edge technology that has made it the carrier of choice for radioactive waste, industrial machinery, and noxious liquids and gasses, and applied them to the needs of moving human beings from point A to point B.  The result is the iGo passenger coach.  Starting in 2077, coach operators can look forward to transporting passengers in comfort and luxury in the clean, quiet iGo.  Available in LNG-, gasoline-, and nuclear-powered models. 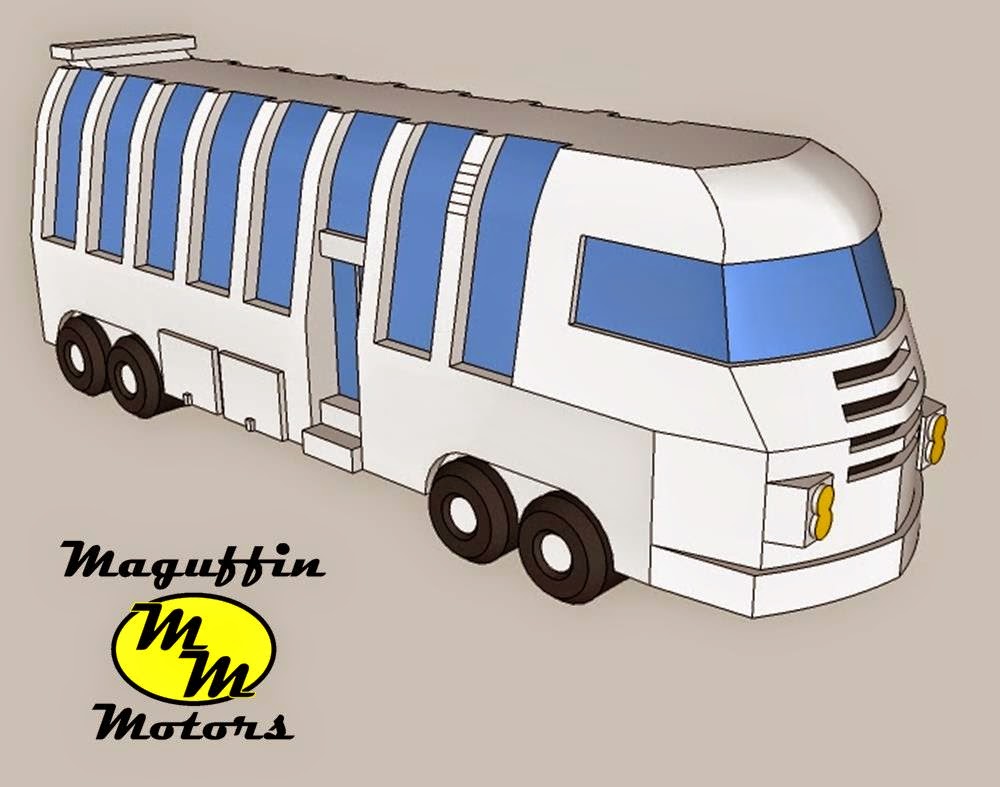 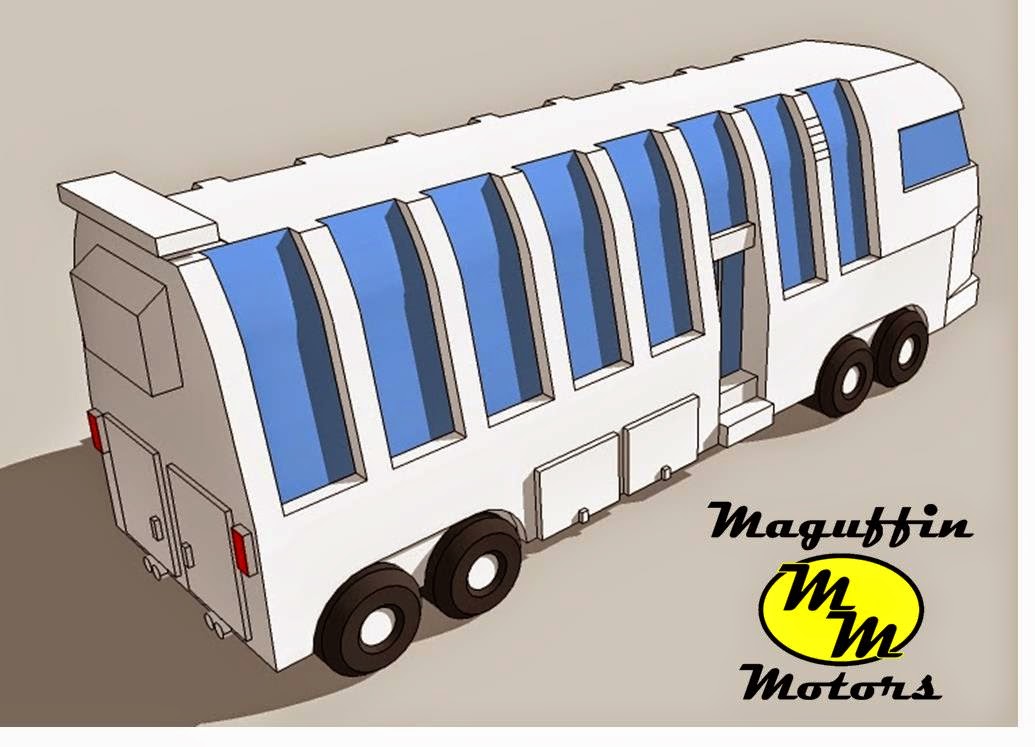 Complementing the wheeled iGo is the iBlow air-cushioned passenger coach.  The iBlow provides an even smoother, more comfortable ride for premium passengers by eliminating contact with the ground altogether.  The front-mounted directional Pratt & Royce jet engine makes the iBlow extremely maneuverable, while the rear-mounted twin engines guarantee speeds of up to 300 kph on the open highway. 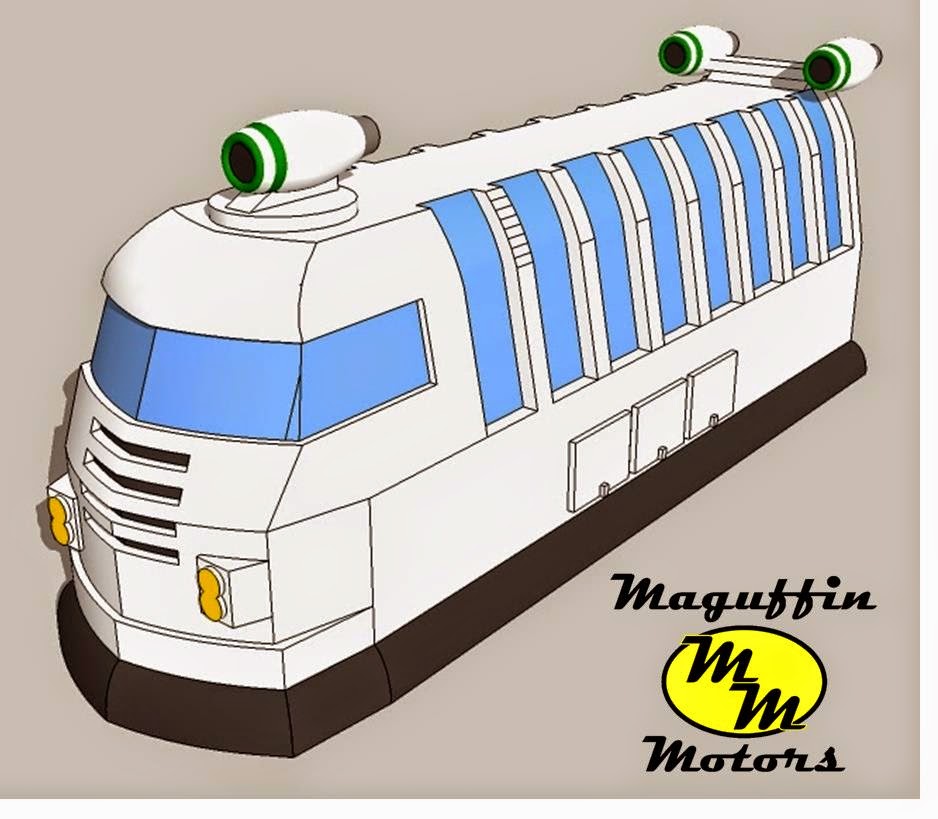 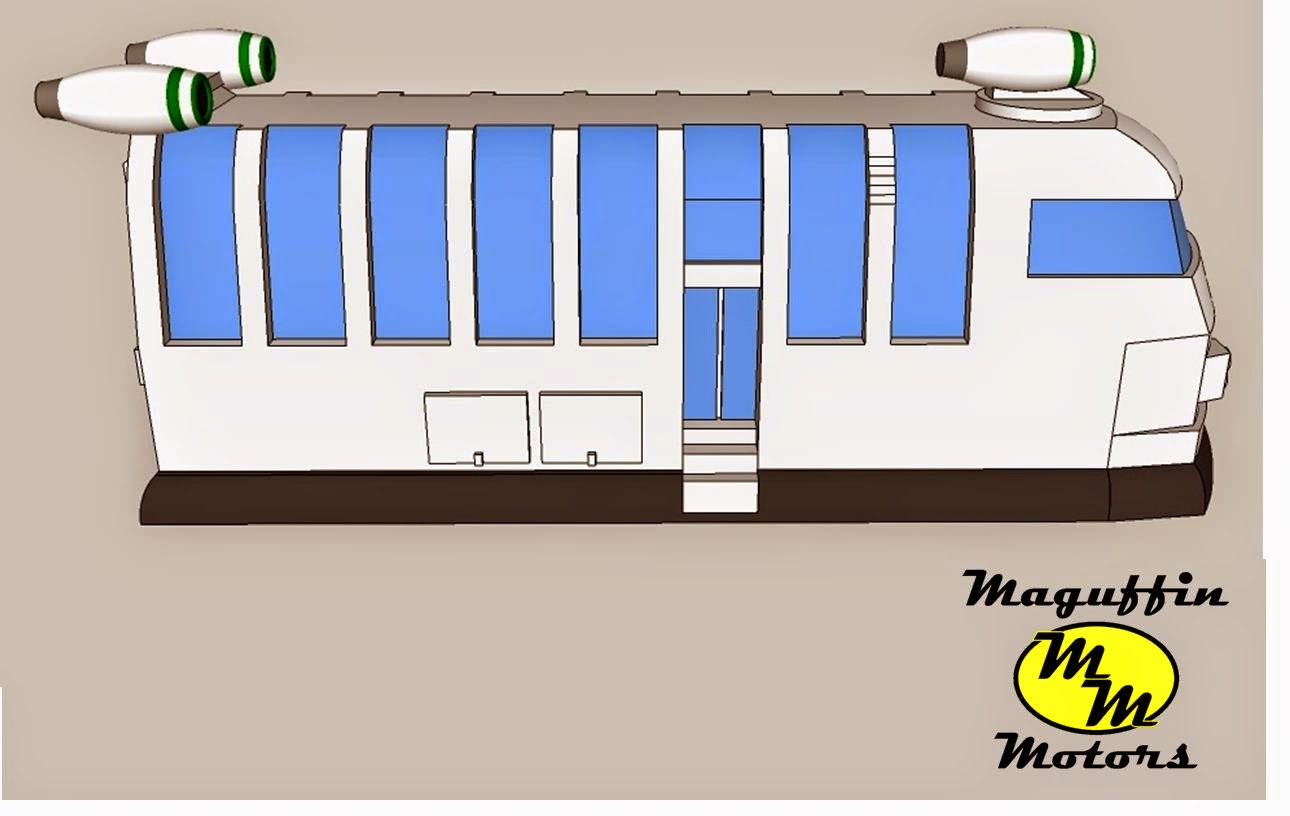 Getting back to cargo hauling, Maguffin Motors presents its entirely-redesigned Brahman panel truck.  The Brahman is powered by hydrogen fuel cells to reduce its impact on the city environment, with nothing but water vapor expelled from its twin exhaust stacks.  The Brahman's bubble-shaped cab and windshield provide excellent visibility for the crew. 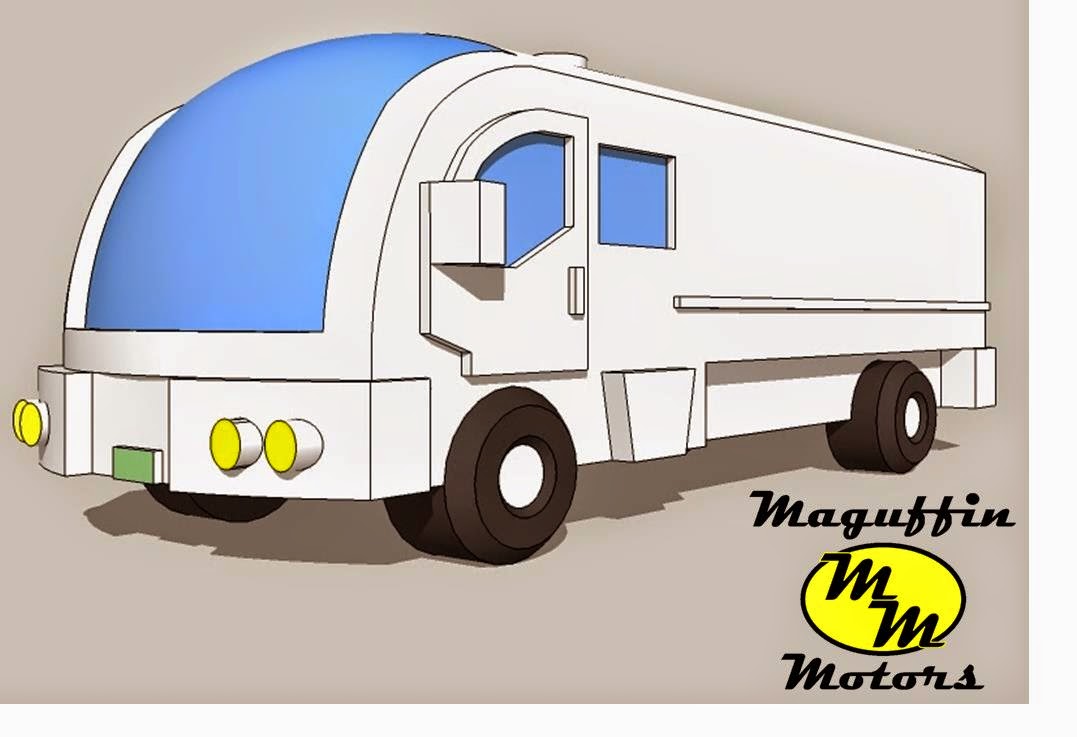 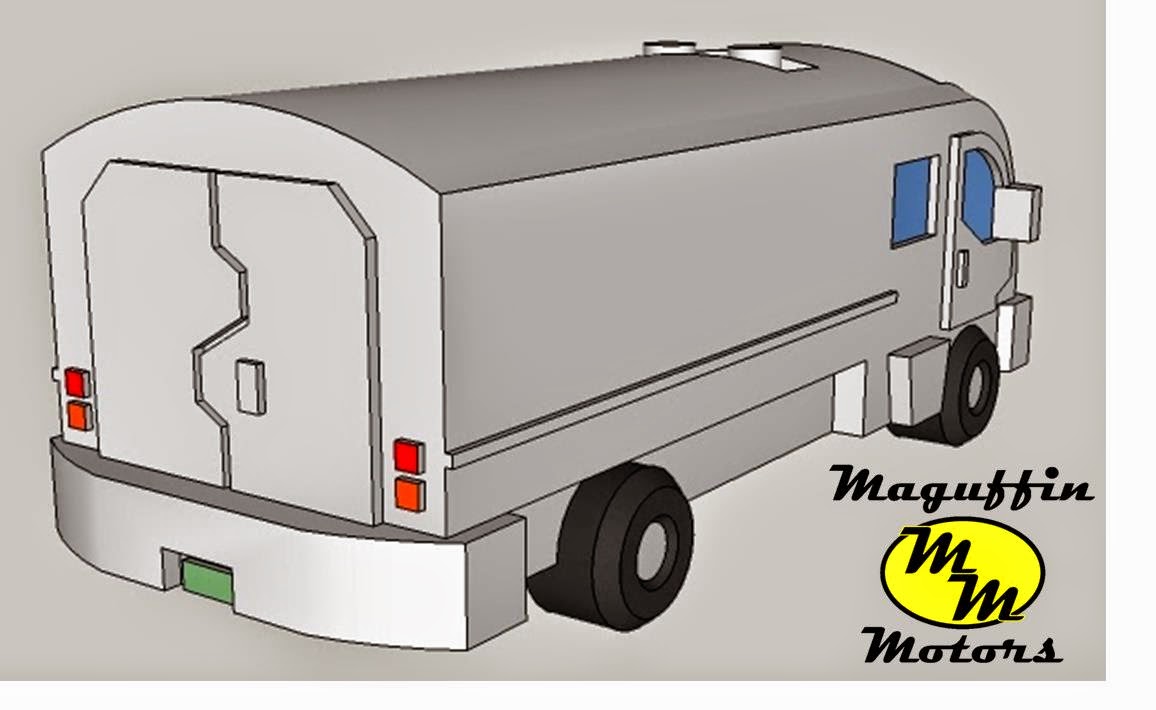 The Grasshopper is Maguffin's answer for small-load intra-city cargo work.  With a one-person standing cab and modular container system, the Grasshopper is perfect for moving small loads from distribution centers to retailers and end-users.  (Giving credit where it is due:  This vehicle was inspired by the very cool UN Aid Necessities Transporter concept vehicle). 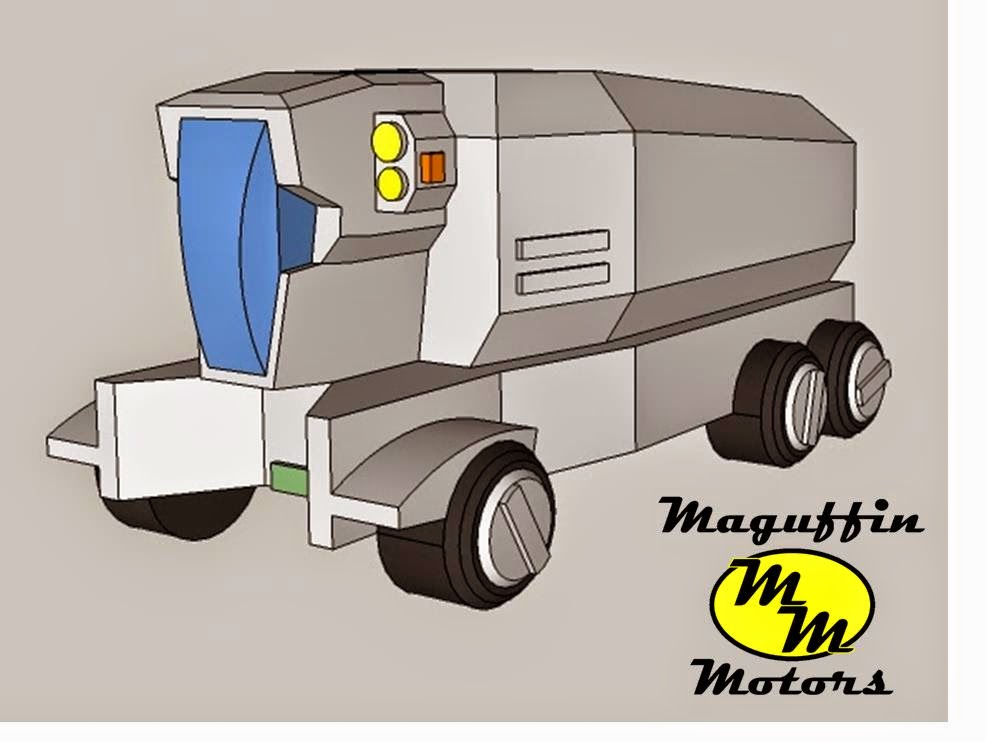 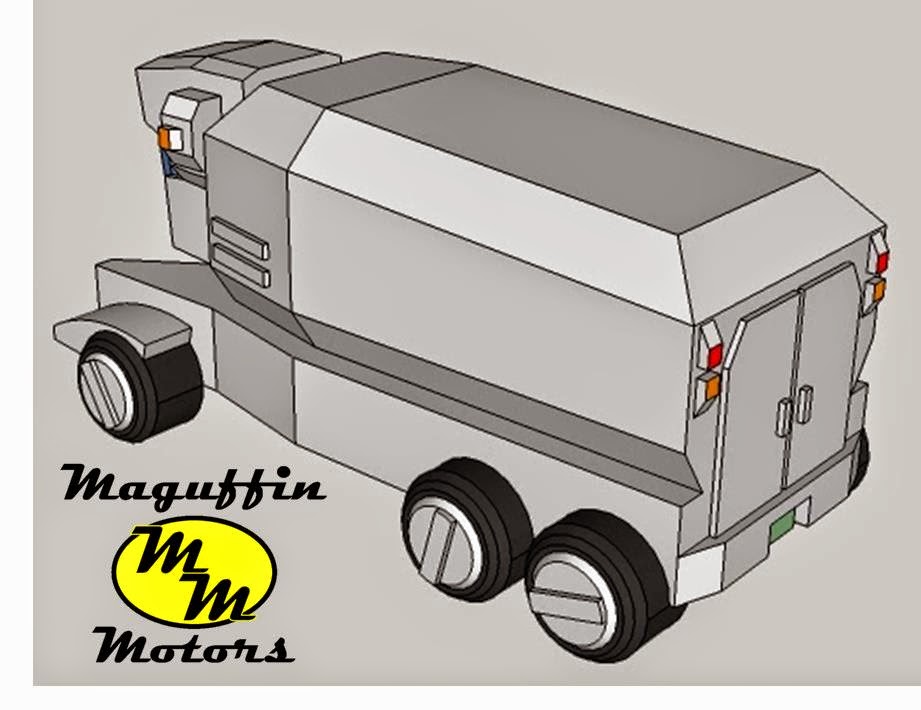 Finally, Maguffin has taken its first steps into the public safety market by adapting its bedrock Myrmidon armored personnel carrier to perform ambulance duties.  The Nightingale air-cushion ambulance is fast, smooth, and equipped with all the latest in medical/rescue technology.  The reactive armor has been replaced by large windows allowing the crew an excellent field of view, and the infantry compartment now has room for three litters and three emergency medical responders. 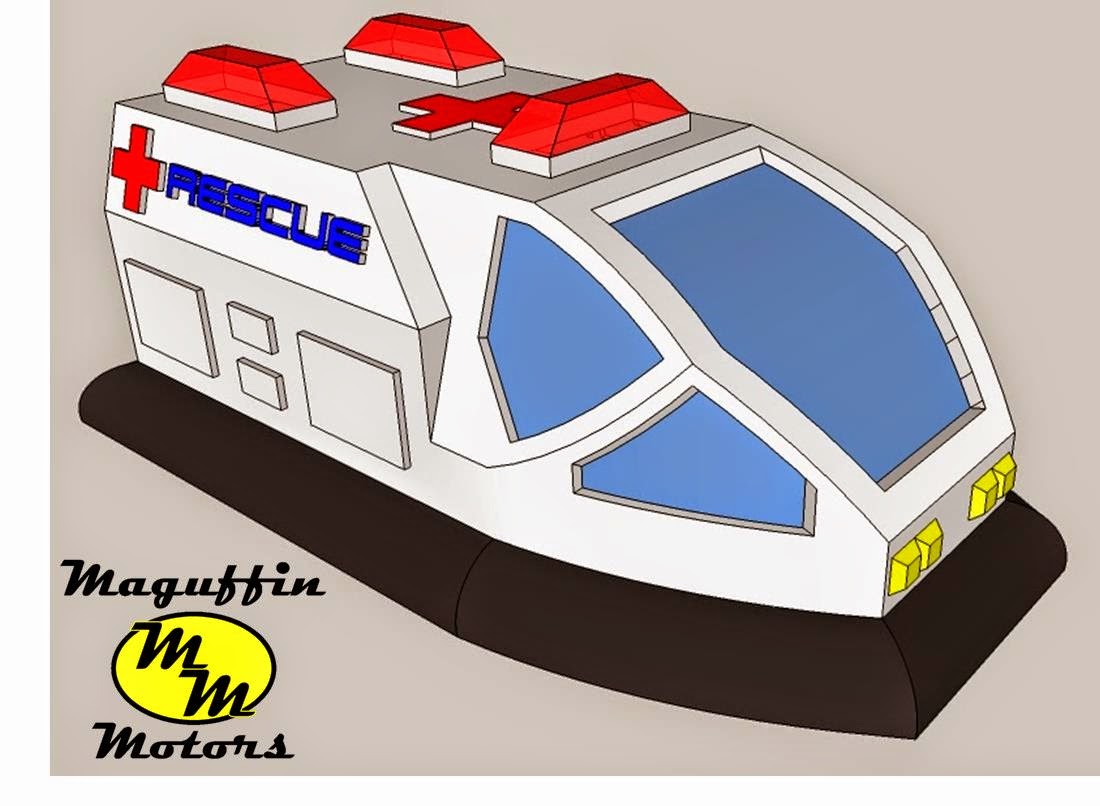 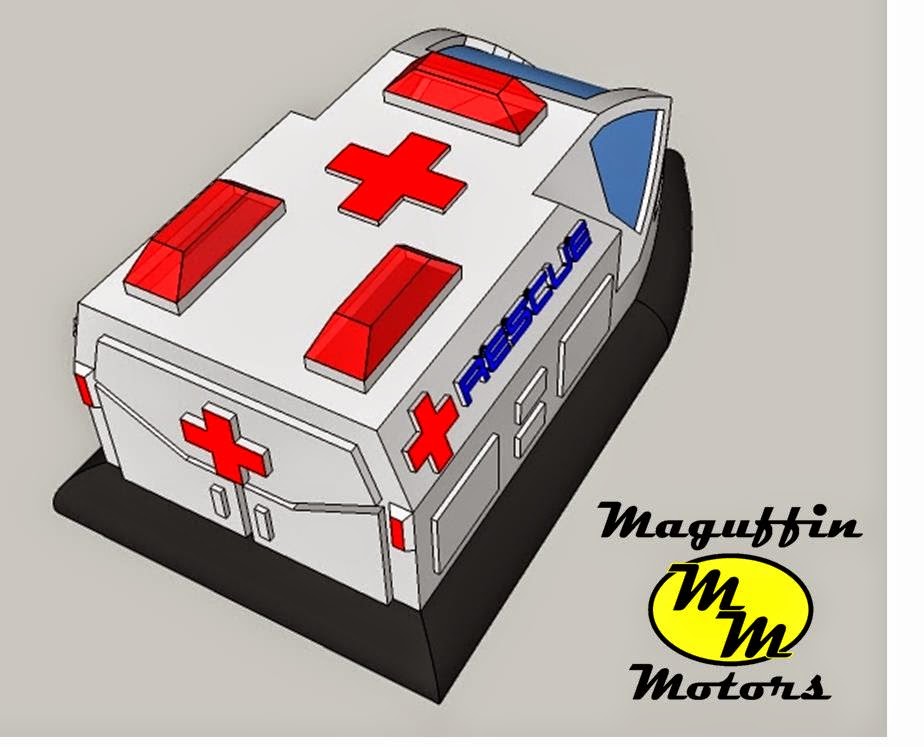 And here is a group shot, with a US quarter and a British Pound coin for comparison:

* If you don't know what a "maguffin" is, it is a term allegedly coined by Alfred Hitchcock to describe a plot device designed to move a story along but which, in and of itself, adds nothing to the story.  Think of the glowing briefcase in "Pulp Fiction", the Ark of the Covenant in "Raiders of the Lost Ark", or even the baby Princess in "Willow".  It's just something that gives the characters something to fight over.